While I was growing up in the Ludwig household, the Smothers Brothers Comedy Hour TV show was a favorite for my family to watch. In the summer of 1968, the Glen Campbell Goodtime Hour replaced the Smothers until they returned in September with a new season of shows. So successful was the Goodtime Hour, that Glen was given his own regular show beginning mid-season of the next year. The show ran for four years.
Well, because of the Goodtime Hour, my mom became a huge fan.
"Glen's on tonight," she would remind me as I scrambled to get out of the house and to first period class on time at North Bergen High School.
That first year, my mom bought Glen Campbell's Wichita Lineman album, and it was played in regular rotation in our home, along with the original Broadway cast album of Oliver. (The Andy Williams Christmas Album completed the trifecta of favorite Mickey Ludwig records, although Andy's was more of a seasonal listen.)
I grew to love the  Wichita Lineman album as much as my mother. I better  have liked it; it was gonna be played whether my dad, my brothers Bill and Tom and I liked it or not! 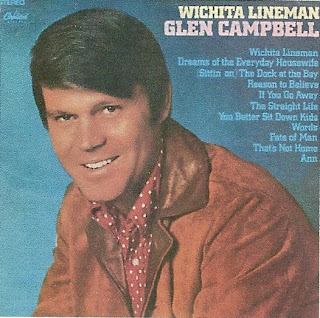 I loved just about every song on it. Glen's cover of the Bee Gees' "Words" was a cool one, and so were "Reason To Believe" and "If You Go Away."  Of course, his big hit at the time, "Wichita Lineman" was great, but my favorite tune on the album was "Dreams of the Everyday Housewife." I don't know, there was something about its wistfulness, the thought of a young woman whose future may have been brighter if she'd have married that other guy, but true love won out, and she married a less successful, yet more loving, man.
In the years since Wichita Lineman, I've sort of kept up with Glen's career. If I knew he was to appear on TV, I'd tape it and check it out sooner or later. I felt bad for him during the late 70's and early 80's, when he made some poor decisions and developed a drug and alcohol problem, and had a tumultuous relationship with Tanya Tucker (that tart!). And, of course, that mug shot from a few years ago, when he was picked up for drunk driving.

The recent news that Glen now suffers from Alzheimer's disease really saddened me. Do you feel, as I do, that musicians are kind of like a part of the family? Heck, Glen was as much a part of the family during the Wichita Lineman period as our beagle, Snoopy, was. (Well, what else would you have named a beagle during the 60's?)
When I read that Glen was going to be giving a "Goodbye Tour" because his Alzheimer's is progressing, and that he was going to be playing close to home, at the Bergen PAC Theater in Englewood, NJ, well I knew I had to be in that audience to show love and support for my "friend."

So last Tuesday, Sue and I sat down in our seats and waited for Glen Campbell. Now, I have to admit to you that I was prepared to see a very sub-par performance, with Glen probably stopping mid-song, tripping over his own feet while onstage...silly ignorant thoughts like that. But I had to be there.

Well, was I pleasantly surprised! From the little bit of research on Alzheimer's that I did before this week's blog, I learned that Alzheimer's, early on, is more of a short-term memory loss condition than long-term. Alzheimer's victims can often sing entire songs from their past, yet not remember something they were told a minute ago. And sure enough, that pretty much defined Glen's performance. He did some truly incredible guitar pickin', and his voice was still strong, and he was able to still hit the high notes. He did, however, require word prompters (I noticed at least three screens on various parts of the stage) for him to read the words to his songs. Of course, I've been to concerts where perfectly healthy performers used prompters, too, but Glen pretty much read the entire song that he was singing.
He would tell a joke before a song, then tell the same joke right before the very next song. But he had three of his loving grown children in his band to help him over the rough spots: his two sons, Shannon and Cal play guitar and drums, and his daughter Ashley plays banjo and electric piano. When he told the same joke for the second time, Ashley gently said, "Daddy, you already told us that one." And Glen good-humoredly said something to the effect, "Oh, well, they just heard it again!"
When Glen needed a piece of gum because, as he explained, he couldn't drink water because then he'd have to go to the "toidy", Ashley came out from behind her piano to unwrap the gum for him. "Thank ya, darlin'," he'd say to her.
He mentioned to the audience that he'd hurt his knee recently and would be sitting for some of his songs. Sue whispered to me, "I wonder if the knee is because of an Alzheimer's fall." That idea started to make sense because in one part of the show, the band left the stage, leaving Glen to sing a song on his own. Before she left, Ashley said, "Daddy, you have to sit down for this one," and she brought his stool to the microphone. His son, Cal, however, did remain on stage, not playing an instrument, just sitting off to the left, I suppose, just in case his dad became disoriented alone out there.

If this sounds like a sad show, it was anything but! Surely, bittersweet could describe it; as I looked around at certain points in the show, people were wiping tears from their eyes. But what I saw more than anything were three loving children now taking care of a dad who had taken care of them for so many years. During the show, as he sang, Glen would walk over to each of his kids and put an arm around their shoulder. More than once, he'd tell us, in his southern drawl, "Ah love mah kids!"

Standing ovation after standing ovation, the audience thanked Glen for not only this particular great performance, for not only giving us so much wonderful music over the years, but also for showing us what COURAGE looks like.
This picture was taken at the Grammy Awards just a few months ago. Ashley's on the left, and Glen's wife Kim is on the right. 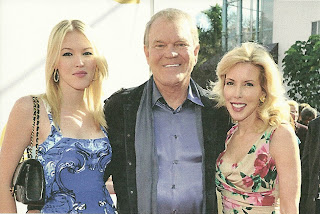 So if you haven't listened to a Glen Campbell song in a while, or if you've never heard a Campbell song, why not take a minute and check one out on YouTube?
Knowing what we now know about him, I hope you'll enjoy him just a little more.
He truly is GLEN CAMPBELL - SUPERSTAR!

If you'd like to view a bit of what I videoed of Glen's concert, here's the YouTube link:

Hey, why not check out my radio show? It's STEVE LUDWIG'S CLASSIC POP CULTURE at www.PlanetLudwig.com. Thanks!

If you enjoyed reading this blog, would you be so kind as to consider buying my first book: SEE YOU IN CCU-A LIGHTHEARTED TALE OF MY OPEN-HEART SURGERY ?
You'll find all the info about it at ccubook.com.

As always, thanks for everything!
Steve