College graduations. Pretty soon, inhabitants of high schools and elementary schools will be singing the song that's been sung since 1972: "SCHOOL'S OUT" !!!
It's almost certainly Alice Cooper's best-known song, and I've been a die-hard fan of his ever since the SCHOOL'S OUT album came out during my senior year at North Bergen High School, in New Jersey.
I've followed "The Coop" fervently ever since. He had released a few albums before that (which I've since gotten into), but for me, Alice Cooper started with SCHOOL'S OUT.
I would guess that the non-fan who's heard of Cooper, but isn't familiar with much more than "School's Out" and perhaps "(I'm) Eighteen," thinks of Alice as merely a novelty act, whose stage show consists of a pet boa constrictor, a lot of blood (some of it even fake---muahahaha!!!!!!!), and either a guillotine or a noose, depending on which method of death the "bad Alice" succumbs to in that particular show.
But Alice offers so much more to those who can find the time to listen.
His lyrics are among the most clever in all of music. Bob Dylan referred to Alice as "...an underrated songwriter." You can say that again, Bob-O.
Aside from a couple stints in rehab for alcohol abuse, Cooper hasn't stopped making music. In September of last year, he released a follow-up (albeit over 35 years later) to his 1975 masterpiece WELCOME TO MY NIGHTMARE (featuring special guest, Vincent Price) with WELCOME 2 MY NIGHTMARE.
I'd like to share with you some of my favorite Coop lyrics...
Never heavy-handed about his born-again Christianity, Alice nonetheless allows this part of his life to seep into a few of his songs. Feeling that it may be time for the Big G's son to return to save us from the continuing brutality of our planet, Cooper sings:

After his first trip to rehab for his overindulgence in alcohol (some reports place him, at his worst, drinking 2 cases of beer and a bottle of whiskey each day),
Alice recorded the FROM THE INSIDE album, a semi-autobiographical tale of his experiences in rehab. One of more beautiful ballads (and you may be surprised at all the ballads that Alice has sung throughout his career) comes from the album. Cooper's character, just before being released from rehab, writes a letter to his loved one, who waits at home. Will she still love him? Will he be able to deal with her in his new sobriety?

Dear darlin', surprised to hear from me?
Bet you're sittin' drinkin' coffee,
Yawning sleepily
Just to let you know
I'm gonna be home soon
I'm kinda awkward and afraid
Time has changed your point of view


One of Alice's biggest strengths, for me, is his humor. He uses it to make clever observations about our sometimes wacky society. Does he feel that some of today's youth may occasionally take it too easy, and expect too much for nothing? See what you think, as he sings the voice of a teenager:


Ever wonder if Elvis made it to heaven? Well, Alice did. He sings this song as the late, great Presley might have:

I had a lot of girls
I had a lot of guns
When they found me dead
The whole world was stunned
Went to the pearly gates
Said, "I'm the hippest thing."
And Peter said, "Well, son,
We already got ourselves a King."
["Disgraceland"]

After twenty-five studio albums (as well as seven live albums), Alice has written some truly imaginative lyrics; I hardly scraped the surface with the four songs I excerpted here.
A couple of years ago, I had the extreme pleasure of meeting Alice Cooper at a convention. It was a thrill; it really was.
As I waited on the long line to have my picture taken with him, I noticed how Alice would "play up" his image with those fans that expected him to be "Alice Cooper," providing an occasional choke hold on his victims. To others like me who approached him calmly, he was simply "Alice." He read his fans well.
"Hi, Alice, I'm Steve."
"Hi, Steve."
We shook hands. I had planned to tell Alice how I had visited his sports bar, "CoopersTown" (cool name, huh?), while in Arizona a few years ago, and how I especially got a kick out of how all the waiters and waitresses wore the famous Alice Cooper eye makeup.
But seeing I was pressed for time, with no end in sight to that long line of people behind me, we posed for the picture; I wanted to be sure to mention one thing to him. I mentioned to Alice that I haven't had a drop of alcohol since 1985, and that his FROM THE INSIDE album held a special musical place in my heart.
"Since '82 for me, " Alice said of his sobriety.
"Yup, I know," I told him. "Well, good health to you, Alice."
"You, too," he said, and then finished with, "We've never felt so good, right?"
"Yup."
And with that, the next person in line was making her way up to Alice.
I left with a good feeling; one of my favorite musical artists was a regular guy, and a pretty darn nice one at that.

No nightmares for me! 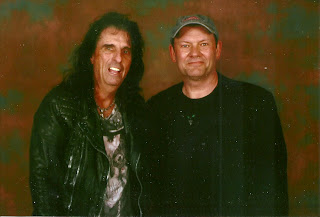 Did you know I have a radio show? It's called STEVE LUDWIG'S CLASSIC POP CULTURE at www.PlanetLudwig.com. Thanks!

SO, HEY, IF YOU ENJOYED READING MY BLOG, WOULD YOU KINDLY CONSIDER BUYING MY BOOK? IT'S CALLED SEE YOU IN CCU: A LIGHTHEARTED TALE OF MY OPEN-HEART SURGERY.
YOU CAN READ ABOUT IT, CHECK OUT SOME OF THE REVIEWS, AND PURCHASE IT IF YOU'D LIKE, AT CCUBOOK.COM.

As always, thanks so much for reading!
Steve