SHOOTING A PROMO FOR MY BOOK,
SEE YOU IN CCU: A LIGHTHEARTED TALE OF MY OPEN-HEART SURGERY
By Steve Ludwig 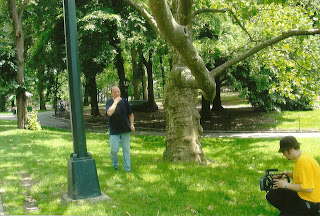 How lucky can one guy be? I fulfilled a lifelong dream of writing a book and having it published. Then to promote my book, Mare Russell, my friend and the mom of a former student of mine, contacted me and through her friend, Evan Ginzburg (a movie producer), I appeared on Evan's internet radio show, Legends Radio, to promote my book and to promote my first-ever public reading at Gizzi's, in Greenwich Village, NY (Evan is the talent booker for Gizzi's.). THEN, thanks to another friend, Lynn Paret, I was able to book a second reading date at The Coffee Machine, 175 Main St., Ridgefield Park, NJ for Friday night, June 29, 2012 from 7:30 to 8:30 PM. Lynn, an accomplished artist, will have her paintings displayed at the Coffee Machine. Please check out her Facebook page, Lynn Paret Portraits, and be prepared to be amazed at the genius of Lynn.
What more could I ask for? Nothing, right? Well, I was asked by Mare's son, Rye Joseph, if he could shoot a promo for my book! Rye is a former student of mine. He was one of those students that a teacher just naturally took to; a great kid, down-to-earth, a hard worker...Well, Rye is now himself a successful movie producer and director. His latest work, the award-winning documentary, Theresa Sareo: Alive Again (directed by Rye and produced by Evan Ginzburg), will appear in a theater near you, followed by a dvd release. (Check out the trailer at
http://www.imdb.com/video/wab/vi1407820057/). [You may have to click twice on the link.]
So Rye, simply because he's a great guy, asked if he could repay me for my support of him as his teacher by shooting a promo to help promote my book. After pinching myself over my good fortune, I was in Central Park, NYC, last Saturday along with my darling of a wife, Sue, and Rye and his girlfriend, Yu Mei Wei, to shoot my promo.
Susie brought along her camera, and her behind-the-scenes shots appear in this blog.
We all met at the 57th St. entrance to Central Park at 11 AM. Days earlier, Rye and Yu Mei had scouted out locations in Central Park that they felt might work best. Rye even sent me footage with Yu Mei walking through what would become my steps, so I could get a feel for what to expect on this "shoot."
Rye's mastery in his field was apparent before he even turned on the camera. He knew the angles that would work best, he took the time of day and the sun's position into consideration for the lighting-- Rye was the man!!! He had done all the work beforehand. Good to know a former student still did his homework!
This "promo stuff" was all new to me. A few days before this, Rye and I had exchanged emails. He left the dialogue up to me, and he was interested to know what I had come up with. He brilliantly tweaked a couple of my lines; I was ready to walk and talk for my director.
Rye made Sue and me laugh a couple times. He had to step over a fence or two to get a couple angles he desired. "Let's shoot this fast," he suggested. "I gotta get outta here before somebody sees me."
Being it was the Memorial Day weekend, and the weather was sunny and hot, Central Park was full of people. We had to wait more than a few times for people to pass. While they passed, I'd inadvertently move a step or two off my spot. "Back up a couple of steps," Rye would tell me. He could tell right away.
As you can see in these next couple of pictures, there was a neat role-reversal happening on this day. Years ago, I had been Rye's instructor; now he instructed me, on all things promo: 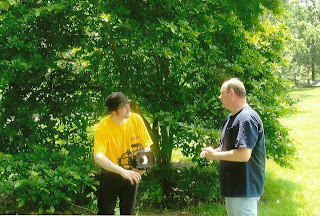 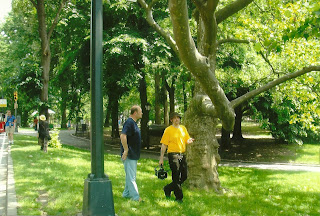 Also a few days before this shooting, Rye had asked me to email him pictures from my book, including my brother Tom Ludwig's hilarious illustrations, and pictures of the front and back book covers (my nephew Billy Ludwig, a professional photographer, had taken the back cover photo).
"But bring a copy of the book anyway," he suggested.
Here's why. Rye and Yu Mei had found a particular tree, and Rye placed the book on one of its branches, for what turned out to be a really cool part of the final product. 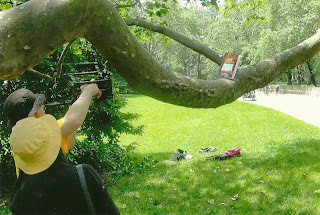 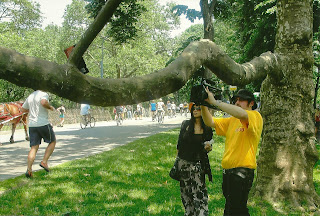 Rye and Yu Mei work well together. Rye told Sue and me that Yu Mei had found a really beautiful spot that might make a nice backdrop for one of our scenes. So over we walked to this fabulous spot with waterfalls, rock formations, and of course, shrubbery. Here I am posing with Yu Mei and her backdrop: 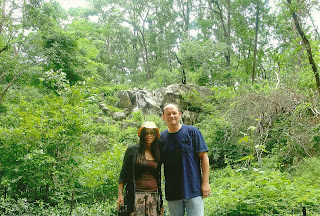 In front of us at this spot were a bunch of park benches. On one sat a woman with one eye reading her book, and the other eye watching Rye work his magic.
She finally asked, "What?" (as in, "What are you guys doing?") and nodded her head toward the whole proceedings. Rye, in turn, nodded at me, and I explained I had written a book and we were shooting a promo for it.
"Oh, I like books," she pleasantly said. "What's it called? Where can I buy one?"
I reached into my bag and gave her a copy of my book.
"Here, hope you enjoy it," and I let her have the book as a little gift.
And I know that's why I'll never get rich writing books, and why I'll be sure to keep my day job, but she seemed like such a nice person, and she did say she'd tell her friends (My luck, she told them, Hey there' s some dope givin' out free books by the waterfalls!").

As we neared the end of our afternoon's work (the whole thing took about three hours), the temperature was easily into the 90's. Rye said we needed to find a shaded area to cool off, and so I could do some voice-overs. Why voice-overs? Good question, because that what I wondered, too.
Rye wanted to make sure, just in case my on-camera speaking wasn't loud enough, etc., that he'd have some back-up audio.
So we found an area where chess tables were set up, and people were busily moving pawns and rooks.Meanwhile, my king of a director had me repeat several lines about four times each. He told me to say them once, pause for a second, then say them again. He didn't say, "Cut," or anything like that; Rye wanted me to just keep saying the lines.
Here I am doing my voice-overs (looking as if I knew what I was doing...): 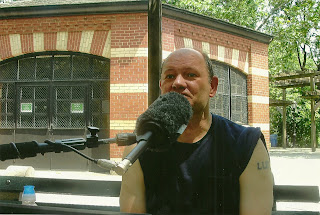 When the voice-overs were finished, so was our day.
For the entire promo, Rye left everything up to me. "Whatever you want to do is fine with me, Lud," he'd tell me. And respectfully, he'd offer his professional opinion if need be.
We left Central Park, and ate at a nearby restaurant, where Rye showed me the day's "rushes" (I think that's what they're called.).

Then we said our goodbyes; Rye and Yu Mei were off to do another shoot, and Sue and I were left with some really wonderful thoughts.
There was never really any doubt in my mind, but my love of teaching was once again confirmed with this day's experience. How else would I have met such  great people like Rye, and through Rye, Yu Mei? And of course, Rye's mom, Mare, who always told me how much she appreciated my work as her son's teacher. And to know that Rye had grown into a successful professional, following his passion, was heartwarming.

Yesterday, Rye posted the finished promo on my YouTube page. So would you like to see the finished product? Simply do a search on YouTube for "SEE YOU IN CCU Promo" or click on this link (You may have to double-click):

By the way, if you or anyone you know would like to use Rye Joseph's services, just contact me at my website:www.PlanetLudwig.com and I'll forward your request to Rye.
Thanks!

I really love pop culture. Do you? You may enjoy my radio show, STEVE LUDWIG'S CLASSIC POP CULTURE at www.PlanetLudwig.com. Thanks!

IF YOU ENJOYED READING THIS WEEK'S BLOG, WOULD YOU BE SO KIND AS TO CONSIDER BUYING MY BOOK THAT WE SHOT THE PROMO FOR: SEE YOU IN CCU: A LIGHTHEARTED TALE OF MY OPEN-HEART SURGERY. All the info can be found at www.ccubook.com.

As always, thanks to all of you for reading!
Steve Ludwig