Don't you feel we all have a book in us, just waiting to get out?
Well, while I was on a sabbatical from teaching last year, I wrote mine!
In 2006, I had quintuple open-heart bypass surgery. When I got home from the hospital, I decided to keep a journal of the oh-so-many fun things that happened to me while I was in the hospital, as well as recording the hilarity of my recovery at home.
While sitting at the kitchen table, trying to turn these notes into some sort of semblance of a book, I remember telling myself, I don't care if I sell a single copy of my book. I just want to be able to say I got a book published, and that I am in the Library of Congress [2011918490 is my Library of Congress Control Number. Yeah, that's right, I have an LCCN. So does J.K. Rowlings. There is something seriously wrong with this picture...].
Please believe me when I tell you, I was quite content to return to teaching and simply stare like a dumbbell at the author's copy of my book that was sitting on my bookshelf next to my favorite Beatles books, and do nothing else with the book.
Soon, however, I was receiving phone calls and emails from my publisher: Why not enjoy the whole experience of having a book published? Have you considered advertising? Why not start a Facebook page devoted to your book? Try that Twitter thing. And blog! How about doing a book signing? Better yet, how about doing a book READING?
Hey, Mr. Publisher, how about just letting me continue to stare at my bookshelf?
Then I began to see my book for sale on the Barnes & Noble and Amazon websites. It began to spring up in select bookstores. I saw positive reviews for my little story.
I found myself googling my name; googling my book's title. I was falling under the spell.
Through Facebook, a fantastic parent (her name is Mare Russell) of an equally fantastic former student (his name is Rye Joseph, now a successful director of documentaries) told me that she had a really nice friend named Evan Ginsburg. Evan is, among other things, the Associate Producer of the movie, The Wrestler, starring Mickey Rourke. Evan is also the host of an internet radio show, Legends Radio (www.legendsradio.net), that reaches a world-wide audience. Through the goodness of his heart, Evan invited me to be interviewed on his show a couple weeks ago. (If you go to the show's website, click on the April 18 show on the homepage, then download the episode. My interview can be heard at the 1 hour, 37 minute mark if you'd like to fast forward. If you have the time to listen, Evan's whole show is wonderful.)
Mr. Ginsburg also books the talent for Gizzi's Cafe (16 West 8th St., NYC), a super club smack in the heart of Greenwich Village; which is just where I found myself last Friday night, on stage, reading from my book to an audience of friends and family, as well as diners who must have been wondering, Who the hell is this guy who's talking about having a catheter stuck up his penis??
Although my book itself is a lighthearted account of my open-heart surgery, I wasn't convinced that my words could hold an audience's interest for my 45- to 60-minute set on stage.
Now, I knew that I would be showing some of the tremendous illustrations that my brother Tom did for the book, such as this one: 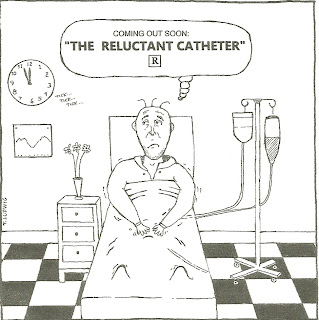 I also knew that I'd be telling the backstory of how we chose this author's picture, taken by my professional photographer nephew, Billy: 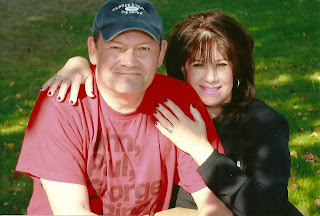 And I knew I'd be waiting until people were eating their dinner before sharing this photo of me in all my SCARRY SPLENDOR, taken by my friend, Carol Toomey, of me in the hospital: 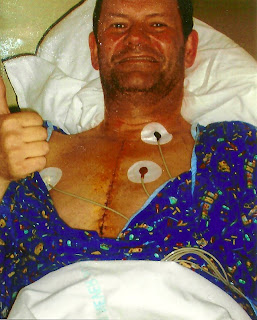 Yet I still wasn't confident enough that I could pull off the "holding their interest" part of the deal.
I love music (who among us doesn't?); I toyed with the idea of playing pre-recorded music in the background as I read selections from my book.
Then I had my "Eureka!" moment...or should I say, I had my "Ukulele!" moment. My friend, Lloyd Gold, fellow teacher and leader for over ten years of his own band, Lloyd United, could join me onstage as my musical accompanist! Would he be interested? Lloyd came through! He would, indeed, bring his ukulele and tiptoe through the Gizzi's with me. As Evan Ginsburg said on his radio show, after I mentioned that I would be bringing a ukulele master with me to Gizzi's: "Nothing says a good time better than quintuple bypass surgery and ukuleles." Well said, my good man!
And, boy, did Lloyd deliver...From serenading my wife, Sue, to a chorus of Susie Q, to singing a beautiful rendition of In My Life during my "thank you" section, Gold the Magnificent added even more than I could ever have hoped for. That's not to mention Lloyd's unprovoked tissue-drying of my sweating slightly-receding hair-lined head.
Here's a picture of us taken by my friend, Anna Pantoliano: 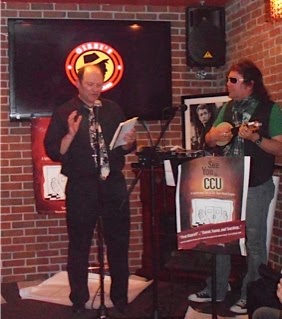 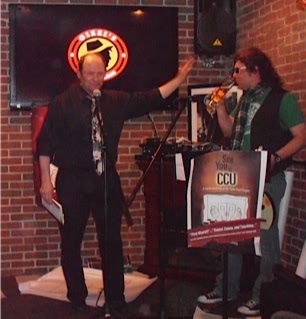 And in this picture above, also taken by Anna, I was explaining to the audience why Lloyd had to make so many "pit stops" during the evening. I wonder if it had anything to do with that beer he was drinkin'?
That was pretty much the tone of our set; pretty light, hopefully a lot of fun.
There's no way I can ever thank all the friends and family members that came to Gizzi's to give me their support.
In a few days, I'll be posting video of our, um, "performance." I wouldn't have been able to post any video had it not been for going-on-five-month-old Joseph Cabrera's dad, Jeff, acting as my videographer. I must also thank Jeff's two lovely and talented assistant videographers, Professor Jenn Strobel and the equally professorial Jessica Schaaf.
I wouldn't have had the courage to get up on that stage without the presence of these beautiful people: Gary & Nancy, Jay & Paulette, Marie, Jill, Larry, Stephanie & Bob, Bonnie, Billy, Matthew, Frank, Rachel, Emily & Sharon and their husbands, Tom & Liz, Jeff, Jenn, Jessica, Anna, Deb, Lynn, Julie & Matt, Carol, Cathy & Dan, Mare and her pals, Evan, and my honey-pie wife, Sue.
As I said at the end of my reading at Gizzi's, Thank you all from the bottom of my healthy heart!

If you like pop culture, you may very well enjoy my radio show, STEVE LUDWIG'S CLASSIC POP CULTURE at www.PlanetLudwig.com. Thanks!

IF YOU ENJOYED READING THIS BLOG, WOULD YOU BE SO KIND AS TO CONSIDER BUYING A COPY OF MY BOOK, SEE YOU IN CCU: A LIGHTHEARTED TALE OF MY OPEN-HEART SURGERY  ? You can find all the info at www.ccubook.com.

Thanks for everything! Steve