"Searching for the time that has gone so fast; the time that I thought would last...My ever present past."
-"Ever Present Past"
THE GREAT PAUL McCARTNEY AT 70
(Part Two of Two)
By Steve Ludwig 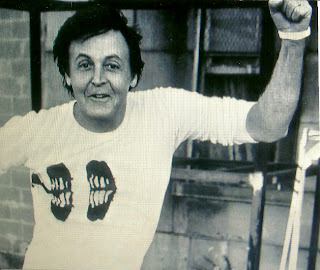 Paul's our pal. He's our friend. A buddy. Whether you grew up with Paul as a first-generation Beatles fan, or met him way after the Beatles (or WINGS!!) split up, he's had our backs. He's opened doors into musical rooms that we never would have known existed without him. Paulie's written pop songs, rock songs, ballads, ballets, classical pieces, poems, and stories. He's created drawings and  paintings, some dating back to his days as a student at the Liverpool Institute for Boys. He actively supports over thirty charities...or at least thirty that are public knowledge.
While he easily could have afforded to send all of his children to exclusive private schools, he insisted they all attend public schools, because if public schooling was good enough for him, it was good enough for his kids.

The recent special edition of TIME magazine, celebrating Paul's 70th birthday, described him as "...the most ordinary of extraordinary men: a historical figure with a common streak, a genius who's still not entirely sure where it all comes from, or came from."
Ok, so maybe Paul became "Sir Paul" in 1997 when Her Majesty (I understand she's a pretty nice girl, but she doesn't have a lot to say) knighted him, but to his fans he'll always be "Macca" or "Paulie" or just "Paaaaauuuuuulllllll!!!!!"

In addition to the genres of music that Paul has produced that I mentioned in last week's blog, his most recent is an album of standards, KISSES ON THE BOTTOM.  (The Beatles were always ahead of the pack. Ringo beat them all to the "standards album" trend. In 1970, he recorded SENTIMENTAL JOURNEY as a musical gift to his "mum.")

Would you like to join me once again in exploring some of Paulie's commercially released, yet probably lesser-known songs?

Hardcore and even casual Beatles fans know that the school of thought that John was the "rough-edged" songwriter and Paul was the "softie" is too simple in defining J & P's writing techniques. Listen to John's "Good Night" (sung by Ringo on the WHITE ALBUM), then switch to Paul's "Helter Skelter" (also a WHITE ALBUM track), and you'll see what I mean.
The same can be said for each of the Fabs' solo careers. There are always a few neat surprises in store for us on every new release.
Here are a few of the Big Mac's best (and perhaps least-known):

What the hell gives you the right
To tell me what to do with my life?
Especially when you made a mess
Of every chance you had of success
Look at you...I'm angry just looking at you!
-"Angry"

Well, I'm fed up with your lying cheating ways
But I get up every morning and every day
Oh woman, where did you get that gun?
Oh woman, what have you done?
- "Oh Woman, Oh Why?"

TUG OF WAR and PIPES OF PEACE were back-to-back album releases by Paul, extending the "peace and love" messages begun with the Beatles.

Hidden on a B-side CD single, not found on any McAlbums, is a song called "Big Boys Bickering."
Here are a few lines:
So while they argue through the night
Shakin' their sticks of dynamite
Babies are dying through the day
They wanna blow us all away
Big boys bickering
Fucking it up for everyone...

And both Paul and Ringo have sung John's "Give Peace A Chance" on their recent concert tours.

Paul has never shied away from queries about his past drug use. Last year, he said he doesn't even smoke pot anymore. But that wasn't always the case.
I recall an interview Paul gave in 1967 when speaking to a reporter about answering an interviewer's question honestly, he admitted to experimenting with LSD. The reporter asked Paul if he [Paul] felt it was irresponsible to admit that, what with the Beatles having so many young followers. Paul's reply: "If he keeps it quiet, I will. I'm not trying to spread the word. It's a private thing, but I didn't want to lie about it. It's his responsibility for spreading it, not mine."
Not much has changed with certain factions of the media, some forty-five years later, huh?
When asked in the early 80's to contribute a song to an anti-heroin charity album, Paul obliged with lyrics that cut to the chase:
Would you rather be alive or dead?
It's as simple as that.
-"Simple As That" 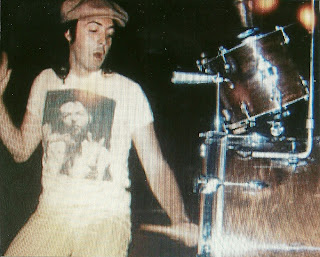 Ya think we can pretty much agree that one of our Paulie's strong points is his ability to write not-always-so-silly love songs?
He can turn a phrase better than anyone:

She makes me do things I don't want to do
I don't know why I should be telling you
I know that you want her, too
-"You Want Her Too"

Something special between us
When we made love, the game was over...
-"However Absurd"

"Buy Buy" says the sign in the shop window
"Why? Why?" says the junk in the yard
-"Junk" 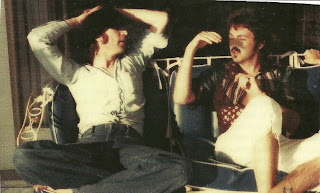 Paul's lyrics run the gamut of themes, among them peace, romance, family, the different levels of love...and mortality.
When he was only 24 years old, Paul wrote with John, "Life is very short, and there's no time for fussing and fighting, my friend ("We Can Work It Out")." Early on in his solo career, Paul tended to deal with mortality in a duality - in first and third person:
Treat her gently, treat her kind
She doesn't even know her own mind
Here we sit, two lonely old people
Eking our lives away
Here we sit, out of breath
And nobody asked us to play

Since George and John's untimely deaths, though, Paul has dealt with his own mortality head-on:

On the day that I die
I'd like jokes to be told
And stories of old
To be rolled out like carpets
That children have played on and laid on
While listening to stories of old...

Now wouldn't that have been the perfect way to end this blog?

However...In the spirit of ABBEY ROAD, when our four heroes chose this message, amid lush orchestrations, to bring an end to their career...their final message to the world on their final album...

...or so we thought that was it. But our irreverent Lads from Liverpool chose to leave a recording engineer's tape mistake tacked on after a twenty-second pause...something about dear ol' Paulie needing to get drunk on wine before telling the Queen of England that he loved her.

SO, in honor of Liverpudlian irreverence, I shall leave our Paul birthday celebration with a couple lines from Mac's "Smile Away":

I was walking down the street the other day
Who did I meet?
I met a friend of mine and he did say
"Man, I could smell your feet a mile away!" 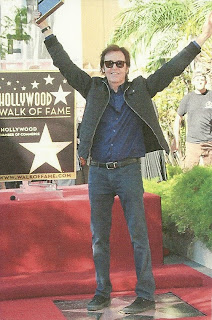 [Hey, if you'd like to check out the YouTube video ("Macca the Magnificent") that I put together in honor of Paul's birthday, here's the link: http://www.youtube.com/watch?v=rmSc6jJWLZs .]

I love pop culture, and if you do, too, you may enjoy my radio show, STEVE LUDWIG'S CLASSIC POP CULTURE. Why not check it out at www.PlanetLudwig.com ? Thanks!

IF YOU ENJOYED READING THIS BLOG (or even if you didn't!!), WOULD YOU BE SO KIND AS TO CONSIDER BUYING A BOOK I WROTE? IT'S CALLED SEE YOU IN CCU: A LIGHTHEARTED TALE OF MY OPEN-HEART SURGERY.
FOR ORDERING INFO, GO TO  www.ccubook.com .

As always, thanks for everything...Steve