[This blog is dedicated to the late, great KEITH JACKSON, who, when he referred to the Rose Bowl as The Grand-Daddy of Them All, uttered the only cliche I'll never get tired of...]

OK, the Super Bowl teams have been determined. Unfortunately, so have most of the things that will be said leading up to, during, and after the biggest sporting event in America.
Not only can we expect the dopiest, most worn-out cliches to invade our ear canals and abuse our eardrums, but we'll hear the most long-winded, unnecessary phrases to explain the simplest of ideas.

My friend Anna recently sent me an essay written in 1985 by the great Kurt Vonnegut. It's called "How To Write With Style," and in it, Mr. Vonnegut offers eight steps for successful, stylish writing.
One of these steps is "Keep It Simple."
So, dear sports announcers and commentators, if a guy can run to the sidelines to turn the corner well, please don't tell us about his great lateral mobility! Tell us he can run toward the friggin' sideline!
And if a team loses its first game of the season, stop with the "They've fallen from the ranks of the unbeaten."
Sports are sports! Don't make them any more than they are. We want to watch a bunch of guys or women throw, catch, carry, kick, and hit a ball. That's it!
Stop being pompous fools, commentators; whether you're smart or not-so-smart, all we want is to watch the game, and for you to clear up a few things we may not know. We'll love you for it, and respect you even a heck of a lot more!
If a guy fumbles, say that! Don't tell us he put the ball on the ground. If a guy jumps up, I don't think to myself, Hey, he can really vertically elevate himself...
It doesn't make us think you're any brighter than you're probably not, OK?
And if you guys do have a brain, please abide by the KISS method: Keep It Simple, Sir.
I promise you we'll eventually turn the sound back up if you simply report the action.

And hey, you athletes, we don't give a rat's backside what you have to say, either!
After all, most of today's color commentators were college athletes who cut class to play in games that began at 9:00 PM the night before they had to report for classes they never attended that were held halfway across the country.
When there's a fight on the field of play, and an announcer points out to us, Looks like we're gonna have some extracurricular activity on the field, uh, I hate to break it to ya, but the game itself is extracurricular activity. The curricular activity is what's happening back in the classrooms. The classrooms, the places without grass on the floor; the rooms where, just like on the gridiron, everyone's on the same page. They must be the students of the game, huh?

When a team's been mathematically eliminated, is that any different than being simply (thank you, Mr. V) eliminated? How about being grammatically eliminated, like most commentators?
Even though the experts tell us that statistics tell the whole story, those statistics can be misleading...And what's the difference? When these two teams get together, you can throw the statistics out the window! And let's face it anyway, they're probably better than what their record indicates.

At least when a player is the best in the business, it's acknowledged that our beloved sports are, indeed, a business, first and foremost. After all, they pay him to make those plays, including that pass that was right on the money. Well, as long as we fans are getting our money's worth. And oh yeah, don't forget the speed merchants: they have speed to burn, blazing speed, and blinding speed.

Of course, anything can happen, even though a team controls its own destiny.

It's a game of inches especially when it all depends on where they spot the ball.

It's amazing how talented these athletes are. They moonlight as clowns and band members as they make their circus catches while marching down the field.

Even though a player may be the best in the game, no question about it, our beloved commentators will, nonetheless, talk about him ad nauseum, the entire game. But why do they even waste their time? Because, after all,  you can't say enough about him.

And, my god, hasn't pro football become religious? Even if a team hasn't got a prayer, their quarterback will stubbornly throw up a prayer (usually a Hail Mary) anyway. And once, pleeeaaasse just once, may I hear this after a game: "I'd like to blame my lord and savior, Jesus Christ, for making us lose the game."  Just once...Is that so much to ask?

I know now why football players wear shoulder pads: usually it's one poor schmuck who has to carry the whole team on his shoulders.
But why does a team need the sideline benches? I mean, don't these guys LITERALLY work their butts off? How can they sit without their butts? And all that wasted money on the domed stadiums; the fans are gonna eventually literally raise the roof with their volume.
Don't get me started on my "literally" tirade! I mean, as a teacher, I give 110% to my students in the eighth grade to teach them the literal difference between figurative and literal. Oh, did I mention my EIGHTH-GRADE students know the difference? Oh, but that's right, my students, some of whom also play sports, actually go to class.

But it's nice to know that teams never have to go to the stationery store for supplies 'cause he's the glue that holds the team together.

Thank goodness we stupid fans have these commentators to lay these words of wisdom on us that aren't obvious to our feeble minds:
-You really want to come away away with some points when you're this close.
-They have to stop the big play.
- You don't want to give up the ball in this situation.
-They need a win to end their losing streak.

I'm also grateful to be told about this promising young rookie. I haven't seen many promising senior-citizen rookies lately.

R.L. should do well in the Super Bowl...He has killer instincts, and turnovers kill the offense.

If you lose, you go home. And while you're home, don't forget your wake-up call and then look yourself in the mirror to figure out why you're not competing for the whole enchilada. While you're at it, open your window of opportunity and throw the game plan out the window.

When athletes play within themselves, do they also reach their deepest penetration? (Yuck!  I don't even want to think about them being in a groove...)

If it's gut-check time, I bet they'll cough up the ball. Coughing up the ball because they're sick? Not feeling well? Ill, perhaps? Hope not, because you can ill-afford to make an ill-advised pass.
Why, I think you should go so far as to fire the coach who gave that ill advice, even if he knows what it takes to win. Maybe someday that once-brilliant coach will regain his past form, because if he merely regains his form, he's not really...oh, wait, yes he is...

Does a player get his bell rung before he gets his clock cleaned? And why be nice and clean the clock if the clock is his own worst enemy?

So watch as one team sucks it up, turns it up, and cranks it up until it's reached the next level and is crowned World Champion, aka the best team in the United States.

Frankly, I've had it up to here. But I'll be watching AND listening, as I know you will be, too.

If you like pop culture, you may get a kick out my radio show, STEVE LUDWIG'S CLASSIC POP CULTURE at www.PlanetLudwig.com. Thank you!

If you enjoyed reading this blog, how's about checking out my first-ever book? It's called SEE YOU IN CCU - A LIGHTHEARTED TALE OF MY OPEN-HEART SURGERY.
Yes, quintuple open-heart bypass surgery can be funny, as I prove in my book. Buy it  from my website:  www.PlanetLudwig.com.  Thanks!! 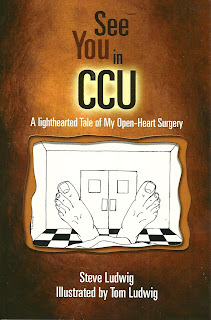 And hey diddle diddle, my brother Tom has his own darn good blog. It's called Second Grade Minds, and it's two adults who have been friends since the second grade discussing (and usually disagreeing on) today's top stories.
It's at  www.secondgrademinds.wordpress.com.

As always, thanks from the bottom of my healthy heart for taking the time to read my blogs...Steve Ludwig