THE GREAT RINGO STARR AT 72
By Steve Ludwig 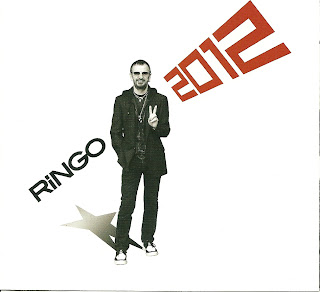 "Ringo is Ringo, that's all there is to it. And he's every bloody bit as warm, unassuming, funny, and kind as he seems. He is quite simply the heart of the Beatles."       -John Lennon

"I didn't like the look of Rory's [Rory Storm, the leader of Ringo's band before the Beatles] drummer myself. He looked like the nasty one, with his little grey streak of hair. But the nastiest one turned out to be the nicest of them all. Playing without Ringo is like driving a car on three wheels."     -George Harrison

When the Beatles broke up in 1970 to go their separate ways and develop their individuality, it was still Ringo whom John chose to drum on his first album (Plastic Ono Band) without the Beatles; George also asked Ringo to play on his first post-Beatles release, All Thing Must Pass. We'll give Paul a pass for playing drums himself on his first solo effort, McCartney. After all, Paul had sued John, George, and Ringo in a complicated lawsuit, which, in effect, dissolved the Beatles, and he was pretty much keeping his distance from the other three. (In the years following Paul's suit, John, George, and Ringo each separately admitted Paul had been right in what he did.)
Still, everyone loved Ringo. How could they not? He was the ego-less one in a band of egos. John, Paul, and George were the brothers Ringo never had. On his 1981 album, Stop and Smell the Roses, Ringo thanked "My Three Brothers" in his dedication.

When I first saw the Beatles on TV on February 9, 1964 (along with 72 million other viewers) on the Ed Sullivan Show, I noticed that Ringo was playing Ludwig drums. I didn't even know there was a drum company named Ludwig! But to see Ringo bangin' away on his Ludwig drums made the Beatles even cooler. I still get a kick out of seeing Ringo play his Ludwig drums these days in concert.

Ringo's the most famous drummer in the world, but is he the best? Well, way back when in Liverpool, before Ringo was even in the Beatles, he was the drummer for Rory Storm and the Hurricanes.

Even though the Beatles were the biggest group in the land (or at least in Liverpool!), they felt a need to replace their drummer, Pete Best. Ringo was considered the best drummer in Liverpool, so John, Paul, and George asked him to leave Rory Storm's group to join theirs. Well, Ringo being Ringo, he first honored the rest of his commitments to the Hurricanes. Before long, Pete was out, Ringo was in. 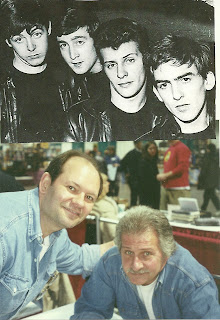 [Notice me touching Pete's back. Well, in my lifetime, I've touched two Beatle backs! Yup, after being touched by Ringo's music for so many years, I thought I'd return the favor and touch Ringo. Read all about it in my March 24, 2012 blog.]

So in their (at the time) small universe in Liverpool, John, Paul, and George, who even then knew a thing or two about what makes good music, chose Ringo to be their drummer.
Ringo may not have agreed, however. In his humble way, early in his career, Ringo said, "Whenever I hear another drummer, I know I'm no good."

I know I can't be objective about Mr. Richard Starkey, professional drummer; to me, the Beatles are at the "toppermost of the poppermost," and the rest have to just take
a respectful backseat.
I'm far from a musical expert (there's one about five miles away...ah, nevermind...), so I did a bit of research to see what people in the know thought of Ringo's talent:

"Ringo wanted to serve the songs rather than show off. His commitment to the music was bigger than his ego."     -Tim Riley, rock critic

"I consider him one of the greatest innovators of rock drumming. Ringo has influenced drummers more than they will ever realize..."  -Kenny Arnoff, "Modern Drummer"

"More than any other drummer, Ringo Starr changed my life."   -Max Weinberg

"His work was remarkably consistent and excellent, from 1962 right through 1970."
-Mark Lewisohn, "The Beatles Recording Sessions"

"The drum fills on "A Day in the Life" are very complex things. You could take a great drummer today and say 'I want it like that.' They wouldn't know what to do."
-Phil Collins

"He puts fills in unusual places that are directed by the vocals."   -Don Was

"Ringo is the most underrated drummer in the industry. When he drummed on my 'Yoko Ono Plastic Ono Band' album [Yoko's companion piece to John's Ono Band album], I was totally amazed that he had no difficulty in following the very complex, improvisational vocals I did."    -Yoko Ono

"Time and again, the Beatles rode his backbeat to glory...The results were extraordinary."   -Martin Torgoff, "The Compleat Beatles"

"He always hit the right tempo for a song and gave it that support---that rock-solid backbeat---that made the recording of all the Beatles' songs that much easier."
-George Martin 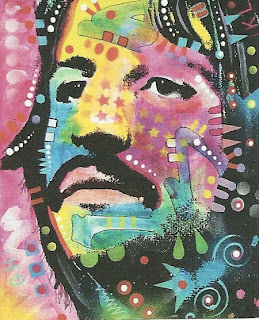 It might be a bit frustrating to Ringo when his drumming is, more often than not, mentioned in terms of his Beatles days.
But since the Fabs called it quits, Ringo has released seventeen solo albums! And that doesn't include the various live albums the Ringed One has released with the various forms of his All-Starr Band. (Beginning in 1989, Ringo has had twelve different All-Starr Band configurations.)
His latest solo album was released just this year. It's called Ringo 2012. One of my favorite tracks on it is "Anthem." In honor of the great Ringo's birthday on July 7, I put together a YouTube photo-collage video (much as I did for Paulie's recent birthday. That YouTube video is called "Macca the Magnificent").I hope you enjoy watching it as much as I enjoyed putting it together. How could I not have liked making it? It's Ringo! It's a Beatle!
If you'd like to see it, here's the link:

Now I'm sure I'll be Beatle-Blogging many more times in the future. So for this week's episode, let's focus on Ringo the solo artist, because I'm not sure the casual fan may realize just all Ringo's done since the breakup of the Beatles.True, the hits don't come anymore; his hits came in the 70's. But that hasn't stopped Starr the star from recording because, in his words, "It's what I do."
I mentioned he's recorded seventeen solo studio albums. I'm going to choose my favorite song from each of those albums (not including any early hits). I checked, and each of these songs are available on YouTube if you'd like to give a listen (nice to know there are fellow Ringo solo fans out there who post Ringo on YouTube). My list is in chronological order, with the album title followed by my fave, fab song, beginning with Ringaroo's first solo release, from 1970:
SENTIMENTAL JOURNEY - "Dream"
BEAUCOUPS OF BLUES - "Love Don't Last Long"
RINGO - "Devil Woman"
GOODNIGHT VIENNA - "Goodnight Vienna"
RINGO'S ROTOGRAVURE - "Las Brisas"
RINGO THE IV - "Can She Do it Like She Dances?"
BAD BOY - "Heart On My Sleeve"
STOP AND SMELL THE ROSES - "Back Off Boogaloo" (Revised version with Harry Nilsson)
OLD WAVE - "She's About a Mover"
TIME TAKES TIME - "After All These Years"
VERTICAL MAN - "Love Me Do"
I WANT TO BE SANTA CLAUS - "Come On, Christmas, Christmas, Come On"
RINGO RAMA - "I Think, Therefore I Rock and Roll" (I have to declare a tie with "Never Without You," Ringo's tribute song to George.)
CHOOSE LOVE - "Give Me Back the Beat"
LIVERPOOL 8 - "Tuff Love"
Y NOT - "Walk With You"
RINGO 2012 - "Anthem" 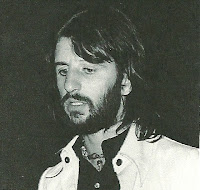 "Heart On My Sleeve" from the BAD BOY album certainly reflects part of Ringo's philosophy of life. Remember when Ringo declared that he would no longer be signing his autograph to things sent to him? In 2008, he posted a video on his website (www.ringostarr.com) telling his fans that as of October 20 of that year, don't bother sending anything for him to sign. He was too busy, so anything sent to him after that date would be sent back.
Well, the backstory to this is that Ringo became tired of signing things for so-called "fans," only to be told by his staff that many of those things appeared for sale shortly afterwards on eBay. Wearing his heart on his sleeve, StarrMann hastily posted the "no more autographs" decree on his site.
I LOVED the crabby Ringo. The lovable Beatle was being cranky, and he spoke his mind. I do think, however, that an explanation at the time might have helped. Ringo did explain his motives a bit later, but by then many people had changed their opinion of him.
There's a funny YouTube video from 2008 of his son, Zak (himself an accomplished drummer) being asked if he, Zak, would also stop signing autographs like his dad.
"On October 25," Zak joked.
For the record, Ringo does sign nowadays, although it's usually just for fans on the street.
Ringo has also been forthcoming about his alcoholism. On July 4, 1984, Ringo came onstage to play drums during a Beach Boys concert in Washington, DC. He has no recollection of it. He knows he was there only because he's seen video of it.
In 1988, he and his wife, actress Barbara Bach, checked into a rehab clinic in Arizona. They've been clean and sober ever since. Ringo's sobriety is one of the main reasons for his All-Starr Band tours which he's done since 1989.
He's also taken up painting and art since he's been sober. This year, he created a really super-cool piece of art.
Since John's murder in 1980, Ringo's been a big advocate of handgun control. Check out his 2012 creation: 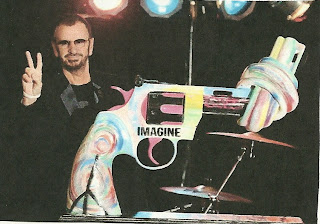 The year after John was killed, on the back of his STOP AND SMELL THE ROSES, Ringo posed, head bowed, wearing a holster without a gun. In the gun's place, Ringo held a bouquet of roses. 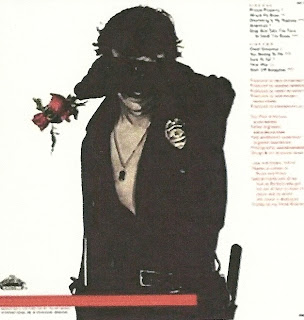 All the money from sales of his paintings go to Ringo's charity organization, The Lotus Foundation (www.lotusfoundation.com). This charity focuses primarily on (but isn't limited to) child welfare, battered women, animal protection, and addiction recovery.
In 2011, Ringo presented a signed (SIGNED!!) drum set to a teenager through the Make-a-Wish Foundation.

Finally, no blog celebrating Ringo's solo accomplishments would be complete without mentioning his acting roles.
Ringo was so critically praised for his performance in A HARD DAY'S NIGHT (by the way, it was Ringo who came up with the title. He also came up with the title of the Beatles song, "Tomorrow Never Knows," as well as contributing this line to the Lennon/McCartney classic, "Eleanor Rigby": "...darning his socks in the night when there's nobody there."), that the Beatles second movie, HELP!, centered around our good ol' Ringo.
Ringo's acting career after the Beatles was inconsistent to say the least. But no matter what movie Ringo was in (and I've seen them all), and no matter how bad the movie was, whenever I saw Ringo on the screen, I thought, "Hey, it's Ringo!" and everything was OK!!
Here are some of Ringo's acting roles: