"LET'S SHUFFLE WIMPY TO THE CHAIR"
From my book,  SEE YOU IN CCU
A LIGHTHEARTED TALE OF MY OPEN-HEART SURGERY
By Steve Ludwig

The following is from Chapter Nine: 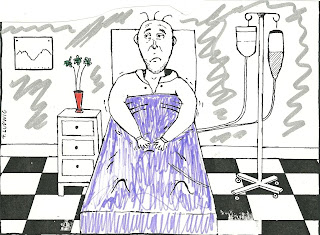 That first night after the procedure was, by far, the haziest, most surreal time of my entire hospital stay.
It was 2:15 early Saturday morning, almost a full day since my operation. It was at that time when two of my nurses lost their minds.
They came to my bed and told me it was time for me to walk from my bed to the recliner chair. Huh? I thought I had a few more months before considering actually moving. And how they were going to accomplish this impossible feat was completely lost on me. I couldn't even blink my eyes without fear of my chest staples popping open, and they want to MOVE MY BODY?
I was sure they had the wrong patient.
Does the doctor know they're going to do this? Who gave the OK? I want to talk to my congressman! Who is my congressman, anyway?
Are these two even real nurses? Maybe they're a couple of those cheese-eating candy stripers they allow to walk around this joint.
When the nurses positioned themselves on each side of my bed, I knew I was doomed. So this is how I'm going to die: trying to move.
That chair had to be two whole feet away! But there was no fighting it now. I didn't have the power to resist.
"OK, sweetie, slide over little by little." They were talking nicely because they knew I was going to die; I was on to their little game.
Me? Slide over? I was scared to breathe too hard, and they wanted me to slide over.
Somehow I did it.
The nurse on my right side gently slid her arm behind my head. Oh, no, what good can possibly come out of this?
"We're going to sit up on three." WE are going to sit up on three?
"One, two, three."
I gave my obligatory "uggghhh" moan. The other nurse swung my legs slowly over the side of the bed.
It suddenly occurred to me that they knew exactly what they were doing. They hadn't lost their minds; I had lost mine.
I relaxed a bit, yet I was pretty sure the step down from the bed to the floor would end my life.
It didn't.
Instead, I was miraculously standing straight up, with each one of these marvelous nurses holding an arm, tenderly yet securely.
"OK, little steps now."
I kind of shuffled two steps, my tubes and intravenous bag following alongside. I sat down in the chair, tentative as ever, positive that everything would splat apart. My nurses placed a blanket over my lap, reclined my chair back a bit, soothing me in the process.
"We'll be right outside." They left, closing the curtain behind them; and there I sat, completely still. Without moving my head, I darted my eyes back up to the clock: 2:25. What a traumatic ten minutes!
Sitting in the chair, I was so afraid I'd hurt myself by moving the wrong way. I was convinced that if I twisted the least bit, my staples would come out, the wires that held my ribcage together would shift apart and become misaligned and heal wrong, my stomach and intestines would spill out and drip into my urine bag. While I was at it, I wondered if my visitors would be able to see that bag of pee. Was it hidden? Who cares? I just had heart surgery!
By the way, some friendly advice if you ever have a hospital stay: Leave your pride in the lobby when you first get there. The quicker you learn not to care what part of your body the nurses see, the more enjoyable the overall experience will be.
Scared to move because of the whole stomach-and-intestines thing, I sat virtually motionless in my recliner for at least an hour. I was perched on a bothersome, wrinkled overturned part of my hospital gown. But I was convinced that this fold on my butt wasn't anywhere as uncomfortable as it would have been if I had moved to fix the wrinkle. That's the type of logic I dealt with in those first few days after my procedure.
I eventually was helped out of the recliner with each nurse again grasping an arm.
"Wait, hold it, OK, hold it, wait, it hurts, wait." I moaned and groaned my way throughout the entire twenty-four-inch journey back to bed. 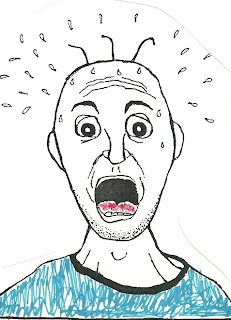 I had hoped to make my nurses' jobs as easy as possible. Sue, my wife, would come home from her hospital with tales of difficult, uncaring patients; so out of respect for  Sue and all the nurses with whom she shares her profession, I didn't want to be one of those difficult patients. I needed to be a good one.
But I knew it wasn't working. I was doing the best I could, but I felt like such a failure. I was so weak, so dependent on my nurses. Without question, now I was most doubtful of my survival than at any other point leading up to this moment.
When my nurses finally put my dopey butt back into the bed, I lay there and looked at the ceiling.
How was I going to be able to do things on my own, ever, in my life? I'd never get better.

I couldn't wait to get into a traditional room on the regular cardiac floor where I could have a phone. I missed talking to my dad. Of course, Sue had been updating him all day with calls to his home down the Jersey shore, but I wanted to hear his voice with my own ears. Mom had passed away two years before, but we still had Dad, and I longed to speak with him.
But I couldn't even speak with my own father because of the shape I was in. I didn't want to be here.
Soon enough, I felt that syringe empty its magical liquid into my shoulder; I knew I'd be floating within minutes. The minutes became seconds.
There I found myself again, across the universe, without a care... 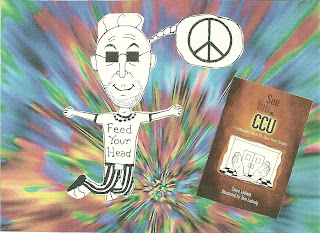 I can't forget my little brother's blog~ He and his buddy since the second grade go back and forth in cyberspace about tons of pop culture topics.
Check it out at: www.secondgrademinds.wordpress.com.

As always, thanks to all of you who read my blogs...And thanks for the 17,000-plus page views...Good health to all of you!
Steve Ludwig 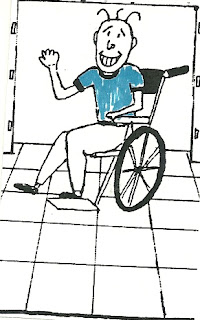